The Importance of Communicating: Getting to Know the Farm Babe 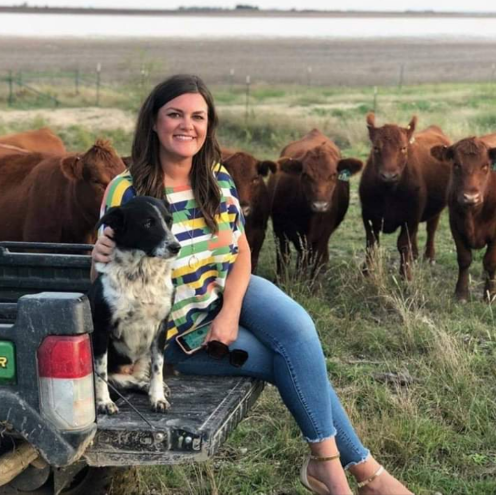 One of my favorite things to do is to talk with people who aren’t connected to farms about where food comes from and how farmers care for their animals. Along the way, I have met many others who share this passion. I enjoy hearing their insights and have learned many things about different aspects of agriculture and the food system.

Michelle Miller – also known as The Farm Babe – brings a unique perspective and voice to describe agriculture. Once a skeptic of today’s food production system, she is now a vocal advocate for agriculture with a devoted following on her website and Facebook page, and she makes her way around the country sharing her learnings through speaking engagements. I spoke with Michelle to learn more about her and her work.

Please tell me a bit about how you became The Farm Babe. Was there an event or series of events or a trend that prompted you to advocacy?
I have a city background… went to college in Los Angeles and spent most of my 20s in Chicago. I had definite opinions on things like organic food, GMOs, factory farms, pesticides, etc. from watching shows like Food Inc. When I met my boyfriend around six years ago, I started learning a lot from him and other farmers here in Iowa. The more I learned about today’s agriculture, the more I felt like I had been duped.

I tried to engage with the blogger known as the Food Babe and she banned me from her Facebook page! I discovered she had blocked thousands of people including agricultural experts who simply wanted to share their stories. So, that’s how the Farm Babe was born. I wanted to be a clear, trusted voice to help bridge the gap between farmers and consumers.

You’ve developed quite a social media following … how did you do that?
When I have time, I’ll engage with almost anybody. In agriculture, I think we often spend too much time talking with each other instead of consumers. There’s a growing network of online bloggers and we share each other’s articles and use each other as resources on a variety of issues to connect with our non-farming followers. It’s important to create good content centered around myths and hot topics in a way that is understandable to those who don’t have a farming background, but who do have a genuine desire to know more about where food comes from.

What most impresses or surprises you about today’s farming?
Just how tech-savvy farming is today. I used to think big farms were bad, but the reality is that 98 percent of farms are family farms. I’ve learned that the big farms are really pretty awesome. They have amazing technology. Some people cling to the image of Old McDonald in bib overalls with a handful of animals, but today’s farmers are equipped in awesome ways – they can receive a text message when a cow gives birth as well as when there’s something wrong with their feed delivery. Most people appreciate new technology and future thinking, but not necessarily when it comes to food production. We’re doing some really cool things out there on the farms… we just need to get the word out.

What are some of the more frequent questions you receive?
It kind of depends on current events. For example, when an undercover video investigation makes the news, I’ll hear from people. They don’t realize that most of these animal activist groups have a vegan agenda. They’re trying to get people to give up meat, milk and eggs. If their goal is to stop animal abuse, why do they wait weeks or months to release the video instead of immediately going to authorities?

I recently did a few posts about one of these video investigations and they reached 2.5-million people.

What would you say is the biggest misconception about today’s food producers and the food system?
The biggest misconception is that big farms are bad. The truth is that most farms are most definitely larger than they used to be. What’s surprising is that this isn’t a bad thing. The more time I spend on farms, the more impressed I am with how they operate. I wish I could take people with me to show them the truth.

Are there some common resources or communicators that you direct consumers to?
Certainly Ask Dr. Dorman – you’re one of my “go-to” people when questions about animal antibiotics come up. The North American Meat Institute does some very effective myth busting. The Animal Agriculture Alliance also puts out a lot of good information. So does the GMO Answers web site. Kevin Folta, a Borlaug CAST Communication Award winner, is an intelligent and clever communicator when it comes to issues like GMOs and genetic technology. Frank Mitloehner of UC-Davis and Dr. Sara Place put out great information on environmental issues. I’m just scratching the surface... there are so many out there and they aren’t difficult to find.

How important is it for people in agriculture to engage with consumers today?
I can’t over-emphasize how important this is. We need to do a better job of getting word to a more diverse audience. I would love, for example, to speak at food and marketing seminars because I feel like consumers are purposely being misled by marketing campaigns. There will always be a certain percentage of people who are unwilling to listen, but the vast majority are in the “moveable middle” – that’s where we need to focus our attention. If we don’t tell the story of modern agriculture, who will?

Thank you, Michelle, for sharing with us!